It’s about expressing confidence in your own ability, while remaining grounded in reality. It shows that you’re comfortable with what you’re presenting in your pitch. To put it simply, transparency is about not actively lying to your audience!

To settle the dust, this isn’t about actually having a really successful campaign, instead, it’s about putting your best foot forward. Both battle-hardened and brand new users can employ transparency in reward crowdfunding. This is especially important if you’re new to the crowdfunding scene because this will help you make that good first impression. That first perception is important.
p>Sometimes we want to trust, we want to fill in the gaps with positives, forgiveness comes to us naturally.  But unfortunately, exaggeration and flat-out lying are also characteristics of human communication.

Here I’ve constructed an infographic about transparency in reward crowdfunding. It outlines some characteristics of a crowdfunding campaign that will help you gain trust, as well as some we believe would raise doubt. We here at BrandRefinery endorse all of these: 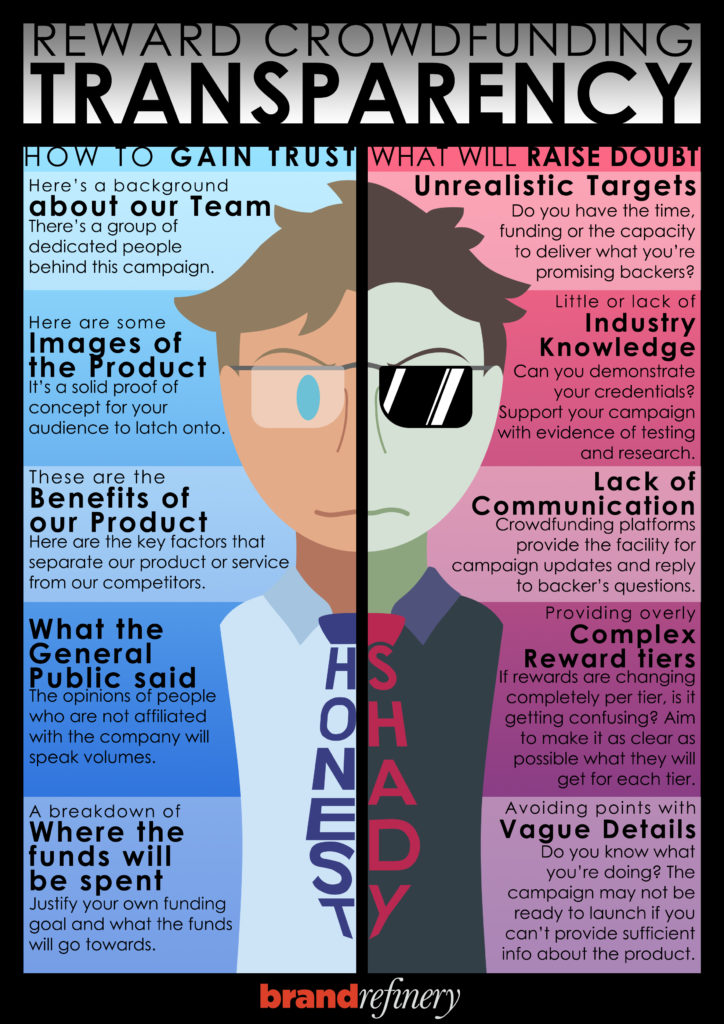 It only takes one bad egg to contaminate the whole batch. Put yourself into the mindset of a consumer, you decide to back your first ever reward crowdfunding campaign. They finally delivered the product and you find it wasn’t what you expected after reading the campaign pitch. This doesn’t mean that it’s bad.  Instead, the original campaign pitch wasn’t clear, the audience was misled. Now do you think they would be happy to jump head-first into backing more campaigns? Or would they disregard the whole practice and ignore other campaigns for years to come?

If you need an example of this happening, I need only point you towards Keiji Inafune’s upcoming (and likely, quitetly cancelled) Video Game Red Ash – The Indelible Legend. A reward crowdfunding campaign that launched on Kickstarter back in August 2015. A campaign founded on delays, redesigns, poor budget handling and widespread disappoint from a previous campaign that had still not released at the time. And as their own pitiful launch campaign popularised: It made everyone cry like an anime fan on prom night!

How else can we make our Crowdfunding Campaigns full-proof? Check out BrandRefinery’s Method for a Successful Crowdfunding Launch