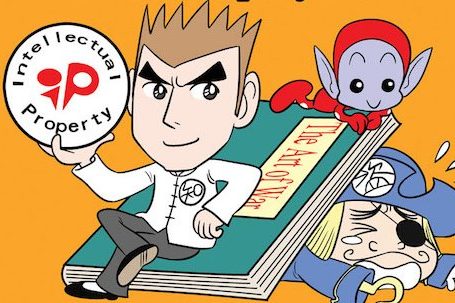 “The law needs to be clarified and simplified to encourage innovation, not stifle it”           Rob Law

The Federation of Small Businesses (FSB) has found in recent research. The UK’s small businesses are struggling to protect innovative ideas. Of an organisation’s 200,000 members, 1000 said that between 75%-100% of their intellectual property determines their revenue. This is becoming a burden on company resources to protect intellectual property, it’s affecting the way SMES grow and operate. It is hindering progress.
Of those asked, 44% said they believed spending money on intellectual property was not a worthwhile investment. A quarter of those polled suffered from some kind of intellectual property infringement over the past five years. More than 50% had their work copied by a competitor, and over 30% had copyrighted work used on another website.
Over the last five years, 32% of small to medium businesses have invested into securing the rights to intellectual property. 22% of whom spent over £5000 through avenues such as a product launch agency or consultant.

A Hands on Approach

Launching a product is not easy. Many infringement complaints aren’t followed up because they’re considered too costly. Or they take too much time or the business is unsure where to start. Engaging qualified and appropriate IP advice before going to market is one way to avoid the infringement uncertainty. Having an expert to call upon should the worst happen means that quick amendments can take place.

Published in 2011, The Hargreaves Review went a long way to modernising intellectual property rights in the UK. Though that’s not to say all is perfect and there are still issues that need to be looked at, tackled or re-considered. Cardiff University’s Professor Ian Hargreaves believes licenses in copyright could be bought and sold easier with an online “one stop shop”. This would do away with old laws that restrict “format shifting”, such as copying music from a CD to a MP3 device.
The FSB’s national chairman, John Allan said innovative brands and ideas are critical to economic success. Otherwise known as ‘the knowledge economy’. Speaking to the Telegraph, Allan said: “Left unchecked, theft and infringement of ideas, patents and brand costs small businesses and diminishes their appetite to invest in their business. ultimately hampering the UK’s long-term economic growth.”

After appearing on the BBC show Dragons Den, The Trunki became an instant hit. As well as one of the most high profile cases of small business copyright infringement. Despite previous profits of £700,000, the company lost £1.5 million in the year up to December 2013. A Chinese rival began producing similar versions of the product.
The Trunki founder, Rob Law told The Telegraph, “It’s a scandal that responsible and dynamic small businesses across the country are forced to invest so much money and time to fight frauds … distracting us from growing our businesses, employing more people… inspiring the next generation of entrepreneurs.”

Distribution
The FSB has recommended that the Intellectual Property Office should collaborate with other countries to develop the Unitary & Unified Patent Court. This is so they are open, accessible and of significant value to small businesses. Co-operation with upcoming markets needs to be a priority of the IPO. Eliminating existing problems around weak intellectual property regimes. It would also address failures relating to enforcement. Helping those who struggle to see the wood for the trees when an infringement issue occurs.
Investment
As outlined in the Banking on Intellectual Property report, the FSB also wants to see the IPO taking a more forward thinking approach. Build upon the progress made by the intellectual property finance toolkit. Awareness should be created by the government using Business Growth Service and growth hubs. Tangible assets should also be used to support financial applications.

Local Enterprise Partnerships (LEPs) and Growth Hubs should interact with small businesses. Making sure that advice from the Intellectual Property Office (IPO) is well highlighted. Lawyers who specialise in intellectual property need to work with small businesses to come up with new ways of charging for legal advice. Using models encourages businesses who would otherwise find the cost of securing patents restricting. The limit for the small claims track of the IPEC should be increased by the government from £10,000 to £15,000. Allowing low value claims to be resolved quicker.
The relaunched IPO Mediation Service should be promoted by the Government as a go-to service. This allows small businesses to access mediation while ensuring that the service remains under review if usage numbers stay low. The IPEC needs to be resourced by the government to avoid case backlog. An investigation into the possibility of a northern England venue also needs to be examined.

What do you think can be done to protect the intellectual property of small businesses?

Brandrefinery are a UK based brand and product launch consultancy. For further information please see brandrefinery.co.uk