Though if you fall into that category, Patreon can be a force to be reckoned with, in a good sense of course!

Being in any kind of creative profession for a living can be frustrating. They can excel in their field of expertise, but may find it difficult to monetise on their efforts. Across YouTube, Ad-Revenue has become increasingly unsustainable. Some factors include exploitative content ID reaping Ad revenue and lack of human moderation).

We’re exploring the benefits of Crowdfunding with Patreon.

According to Patreon Data Science Manager Maura C: across the biggest ad-supported platforms, advertisers might pay creators between $.10 to $.0005 per view”.

Advertisers only pay when a viewer engages with the ad too. Meanwhile on YouTube, unless you have 1,000+ subscribers and 4,000+ watch hours, you don’t get the option to run ads. It’s a vicious circle for online content creators. But this is where crowdfunding can help support your content: 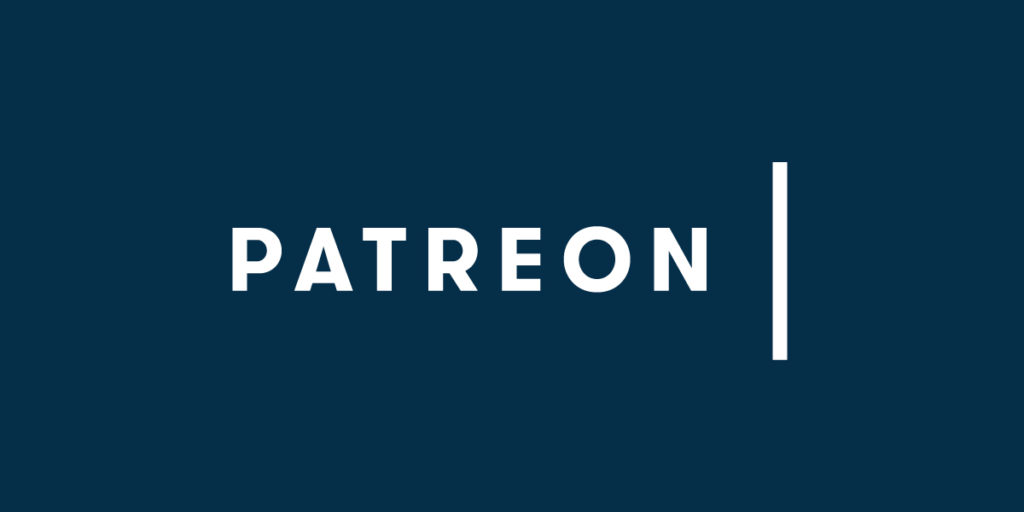 In brief, Patreon is a subscription-based service available to freelance online content creators. It gives them the opportunity to showcase their skills to an existing audience. Offer incentives and exclusive content to garner monthly pledges to support their work. Otherwise they can set up pledges per project, whichever model suits your craft best. Patreon has helped thousands of content creators to carry on doing what they love. Thanks to the generosity of our Patrons. FYI: Crowdfunding backers on Patreon are referred to as ‘Patrons’.

According to Patreon as of 2019, Patreon is hosting over 100k creators across the site. With over 3 million active Patrons to support them.

Who should use Patreon?

Unlike other Crowdfunding platforms, creators use Patreon to set up a subscription service. It’s designed to support online published content: Art, videos, music, podcasts. Any form of independently made entertainment hosted online are viable to use Patreon. Although, if you’re making physical goods or setting up an online service, Patreon isn’t the right platform for you.

If you’re familiar with Kickstarter or Indiegogo, Patreon use some of the same practises to entice backers. Here are a few tricks they have in common:

For a better insight on how the platform performs for creators, we’ve reached out to a long-time user of Patreon. GigaBoots.com produce Video Game let’s play videos, tech videos, podcasts & Livestreams. All of which are supported through Patreon Crowdfunding. I asked Co-creator of GigaBoots, Dan Mitchell, a couple questions on Patreon Crowdfunding. I’ve also given my 2 cents based on each answer:

So back in October 2014, you opened a Patreon account. Why did you do this?

“We did this so we could hope to make the channel more sustainable. With Patreon we were able to raise more money for the channel… which made running the channel vastly easier. Past that we were able to justify more expenses on specific content… for the people who were fans of it. “

Online content creators can stumble into just as many expenditures as any other profession, especially if they’re approaching this as a full-time career. Crowdfunding through Patreon opens up the cash flow to keep content coming at a sustainable rate.

Were other crowdfunding platforms (ie. Kickstarter, Indiegogo, YouTube Premium, Twitch Partners) considered to support GigaBoots? If so, why did you pick Patreon above other platforms?

“Kickstarter and Indiegogo are one-and-done deals and what we were looking to do was create sustainable income for GigaBoots. We do utilize YouTube Premium via gained revenue per-view but haven’t looked into doing special features using memberships on YouTube or Twitch… Streaming on YouTube instead of Twitch is helping us reach more people overall. “

GigaBoots use YouTube streaming features to invite one-off pledges to the support production. It presents an open avenue to new and existing viewers alike. Patreon’s monthly model is better suited for maintenance and ongoing production funding. A more modest but consistent trickle of revenue could help prevent rash spending decisions. You won’t have a large sum of money at any one time.

Be it positive or negative, has Patreon had an effect on your relationship with your audience?

“Our audience is incredibly supportive… I often don’t have time to do some of the rewards… Our supporters often understand and almost all of them apologize when they stop supporting us due to financial constraints. I tell them they don’t need to apologize… I want them to feel better about the support they have given us.”

With Patreon, we can identify a segment of your audience that willingly supports you financially. An audience that cares about the creators content and well-being. More importantly, it can build mutual respect, even when deadlines can’t be met, or Patrons pulling out support to pay bills. No matter how small a sum pledged, it speaks volumes over your regular audience. It’s the ultimate customer loyalty system.

Since Patreon can collect funds on a monthly basis rather than in a larger sum through other crowdfunding platforms, how has crowdfunding through Patreon impacted your content in terms of productivity and quality?

“… I’m not interested in doing safe, stagnant content. I always want to push the boundaries of visual fidelity, scope of content, and comprehensiveness of it. Patreon helps us disincentivize video performance and just focus on quality.”

Crowdfunding with Patreon can preserve creative freedom! No more forcing your hand into the mainstream. Patreon gives you the opportunity to stick with a niche audience while remaining financially sound.

Crowdfunding continues to be a powerful and adaptive tool, for both small startup businesses, and online content creators. A very special thanks to Dan Mitchell of GigaBoots for the valuable contribution to this blog.